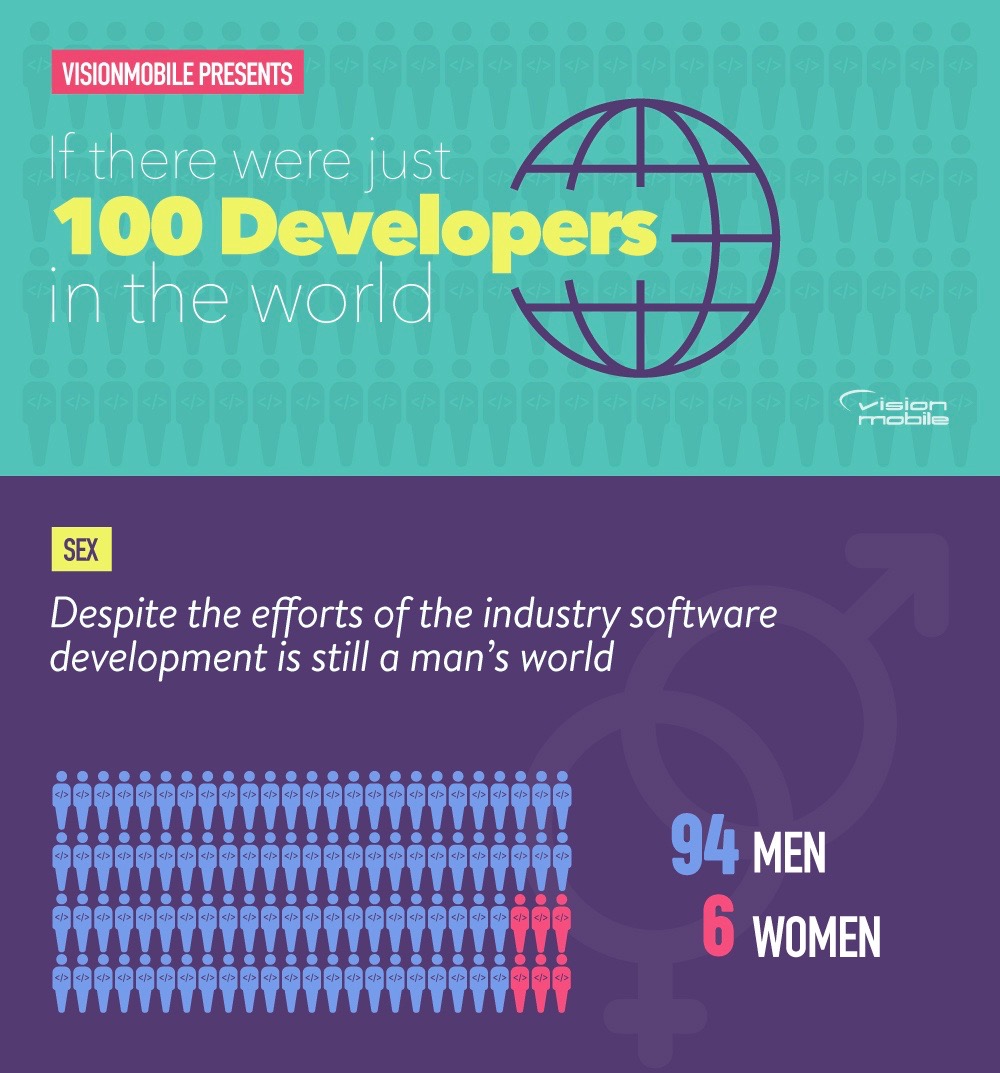 [UPDATE: The survey is now closed -Enjoy the infographic]

Have you ever asked yourselves what would the world be like if there were only 100 developers in it? Well even if you haven’t, we are sure we have just made you think about it.
Based on our Developer Economics survey that reaches 30,000+ devs per year, across mobile, IoT, cloud, desktop, AR/VR, machine learning , we designed a very interesting Infographic illustrating this scenario.

Check it out and find interesting insights about the Developer World : 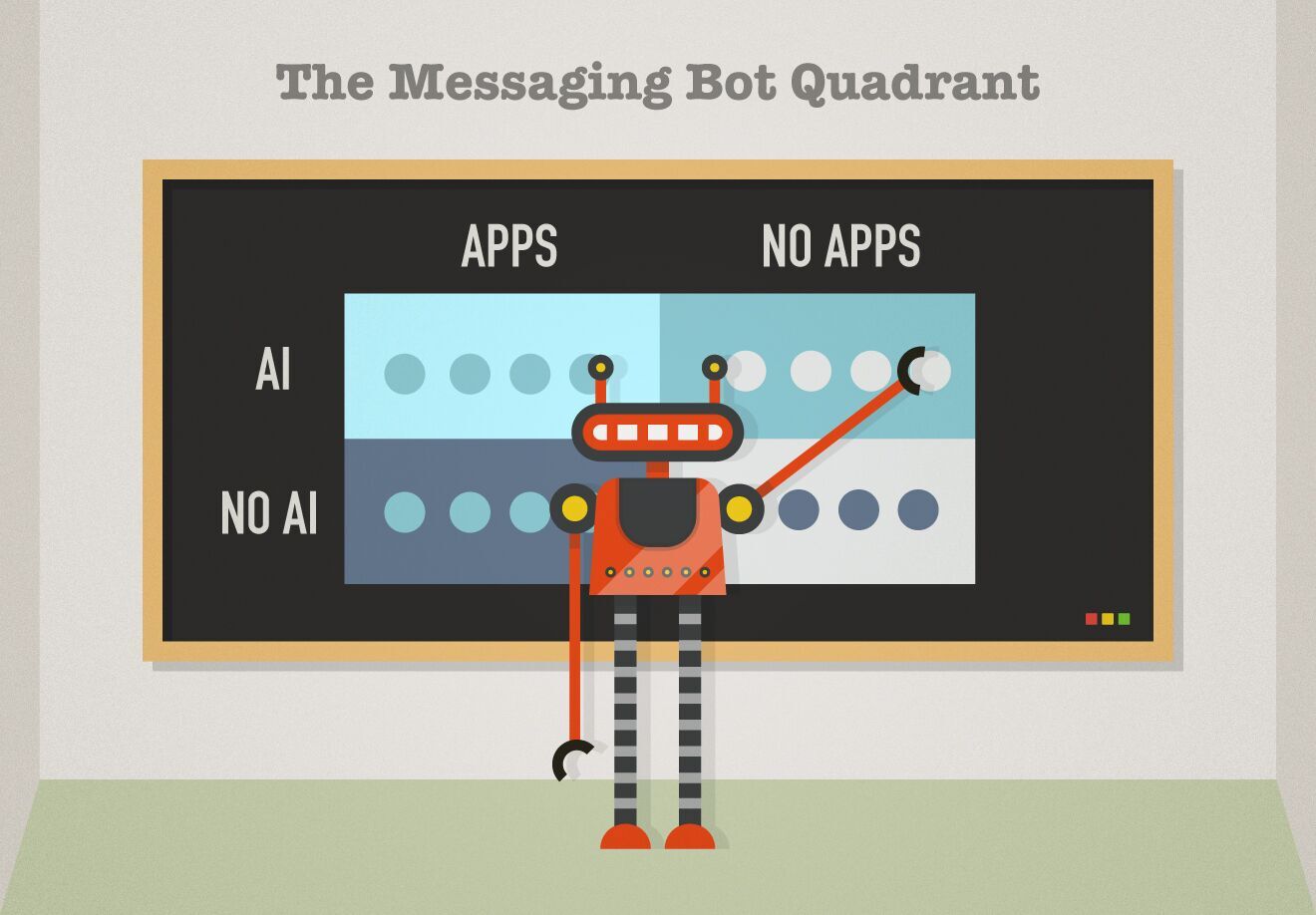 These days everyone and their uncle is talking about chatbots as the next thing after apps. But ‘Chatbot’ is a rather poor name for explaining the changes taking hold in mobile. ‘Chatbots’ are a mental model suited to developers. The term means very little to users. Besides, ‘chatbots’ represent only a small part of what is happening in the messaging space. 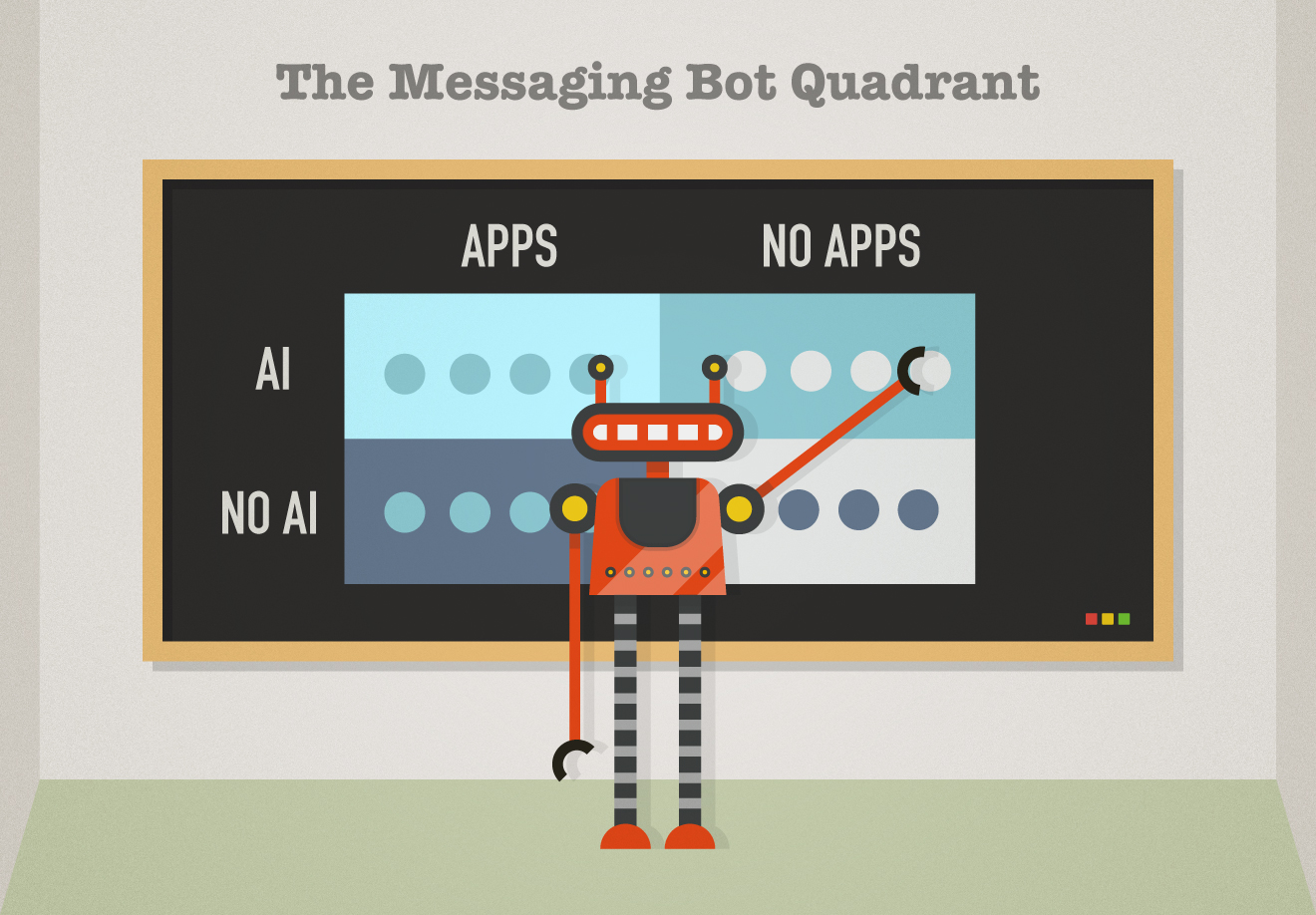 The tech media and blogosphere usually focus on one of three things when talking about ‘chatbots’:

In reality these three things are quite independent and sometimes the discussion in the media reminds me of the famous Indian proverb about an elephant and the blind men.

The elephant is really about billions of people relying on messaging as their main person-to-person communication tool and in the process getting used to what Dan Grover, WeChat Product Manager, calls the thread-centric UI.

It’s no stretch to see WeChat and its ilk not as SMS replacements but as nascent visions of a mobile OS whose UI paradigm is, rather than rigidly app-centric, thread-centric (and not, strictly speaking, conversation-centric).

The next natural step is to apply the same thread-centric paradigm to communicating with businesses on mobile. It works brilliantly. It works in China, where WeChat/Weixin is on the way to becoming an alternative to the mobile Internet itself. It works in Brazil, where WhatsApp has become a one-stop solution for everyone, from small businesses to government agencies, to manage everything, from transactions to recipes and relationships.

There are thousands of business to consumer chat services already, from early-stage startups like ChatandBook and AndChill, to large corporations like KLM, Disney and NBCUnversal. To compare and contrast all the different approaches we consider two independent axes:

The “apps vs no apps” axis is about whether the service is delivered as a standalone iOS or Android app, or whether the service ‘lives” inside horizontal messaging platforms (Messenger, Slack, Skype, Telegram, Kik, as well as SMS). The “AI vs no AI” axis is about whether the chat service is powered entirely by human operators or uses AI-based natural language processing to automate all or parts of conversations. These 2 axes give us what we call “the messaging quadrant”. 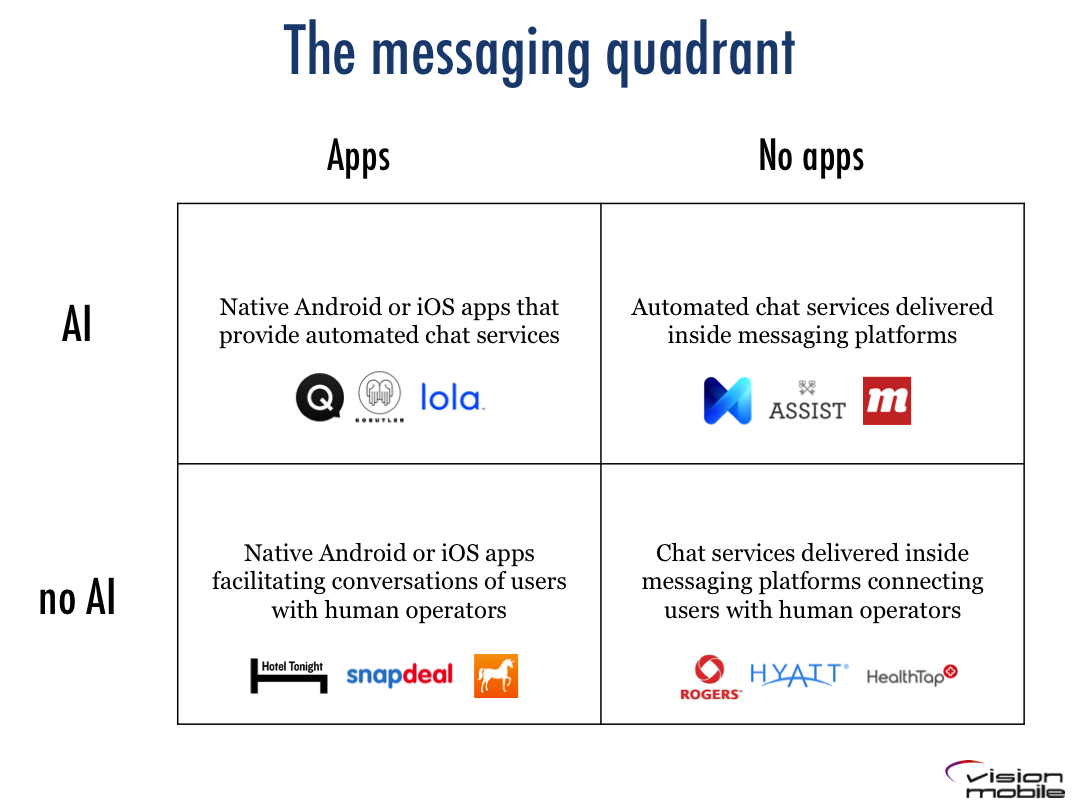 Apps without AI: There are iOS or Android apps that connect users with human operators through a chat-based interface. For example, HotelTonight offers a human concierge service called Aces inside its mobile app. Snapdeal, Indian e-commerce service, provides chat-based support to its users by connecting them with human operators, again within the Snapdeal app. Yup (formerly MathCrunch) connects students with tutors over a chat-based app. Wellness specialist Vida connects users of its app with human coaches. Pana connects you with a real travel agent, and on and on.

Apps with AI: In this quadrant we find standalone chat apps that use AI to automate all or parts of the interaction with users. For example, GoButler uses AI to help you with travel planning. Ozlo helps you to pick a restaurant or a coffee shop, Lola Travel reinvents personal travel by combining of AI with human travel agents, and so on.

The mobile app approach makes most sense for companies that already have a significant user base (like Snapdeal or HotelTonight). They don’t have to rely on the broken app store distribution to attract users.

For everyone else, I believe a native iOS or Android app is just a stop gap. The high cost of making, distributing and supporting native apps combined with the distribution power of messaging platforms will push the majority of companies to skip mobile apps completely and deliver their services directly inside messaging platforms. Let’s look at some examples. Operator, a US-based shopping assistant that connects users with shopping experts initially started as an iOS mobile app, but recently started offering its services over Facebook Messenger.

No apps, no AI: In this quadrant we find services connecting users with human operators inside popular messaging apps or SMS. For example, Rogers, a Canadian telecom operator offer access to its support operators through Facebook Messenger. Examples are numerous. If this sounds boring, consider the business potential of replacing millions of 1-800 customer support numbers with 21st century technology and user experience. Just replacing clunky IVR with simple messaging plus custom buttons and asynchronous communication with the agents are huge steps forward. (I hope you’re not listening to some boring hold music over the telephone while reading this post.)

There is also a growing number of services connecting users with human operators and providers over messaging platforms. For example, HealthTap makes its network of U.S. physicians available to Messenger users worldwide.

AI without apps: This area generates most excitement with entrepreneurs. It allows access to users without the costs and headaches of native mobile apps, while promising to be much more scalable than services dependent on human operators. AI can have enormous impact without reaching full automation. Consider that in customer support recognising and automatically responding to the top 10 simple queries, while routing everything else to a human operator might allow a big corporation to cut lots of call centre jobs.

Facebook itself is experimenting with M on Messenger, where it uses humans to train AI and create a fully automated personal assistant. Assist uses natural language processing to connect users with a host of on-demand services over SMS, Messenger, Slack, Telegram and Kik. Meekan automates meeting scheduling for Slack teams and on the way helps you to find the flight. Databot allows you to “speak with your database” simply in a Slack chat. The list of automated chat services grows every hour.

A post-app ecosystem in the making

Stan Chudnovsky, Head of Product, Facebook Messenger said at TechCrunch Disrupt that “tens of thousands” of developers are making messaging bots for the Facebook Messenger platform. Already tens of companies are building tools for bot developers – From giants like Facebook and Microsoft, to startups like Smooch, Kasisto, Reply, Meya, and Init.

It’s clearly the beginning of a post-app wave and the hottest opportunity for developers disillusioned by mobile apps. We cannot wait to share the results of our 12th Developer Economics survey, which includes questions on bot development. 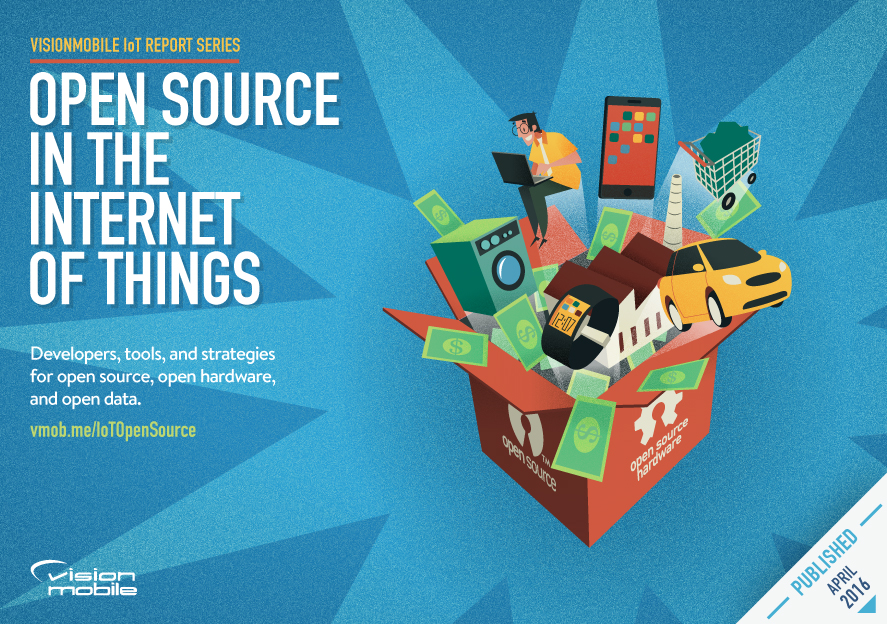 Did you know that 91% of IoT developers use open source technology in their projects? Our latest Premium report in the IoT series –Open source in the Internet of Things -not only confirms the figure but also sheds light to a number of tools and strategies that developers employ for open source, open hardware and open data.

The data in this report comes from our 10th edition Developer Economics survey (Q4 2015). 3,700 Internet of Things developers answered questions about their use of and attitude towards open source technology.

To give you an idea of the findings of the IoT report we have prepared an infographic depicting some of the key findings. Have a look at some of the most interesting trends that have been extracted from the report and give a very  representative outline of the the mindset of IoT developers and their contribution to the open source community  :