As software continues to eat the world (to paraphrase Marc Andreessen), software developers fulfill an ever more critical role in the progress of technology and, by extension, society. Supporting developer productivity is good for business. Those developers then become innovators – co-creators – that give a boost to your core business.

It’s also challenging. Developer programs consist of a myriad of activities, ranging from simple providing sample code and developer education, to tooling, to in-person events and online communication. It’s hard to be great at everything, and it’s hard to allocate effort and money effectively for maximum impact.

Every six months we benchmark top developer programs against each other. First, by measuring what developers value in those resources and activities, in all its diversity across several segments of the developer population. Second, by highlighting the best practice leaders: those vendors that are doing an excellent job in specific aspects of developer programs, to whom you can look for inspiration and insights on how to improve. There is no single leader across all of the 20 activities we measure – everyone can improve somewhere. 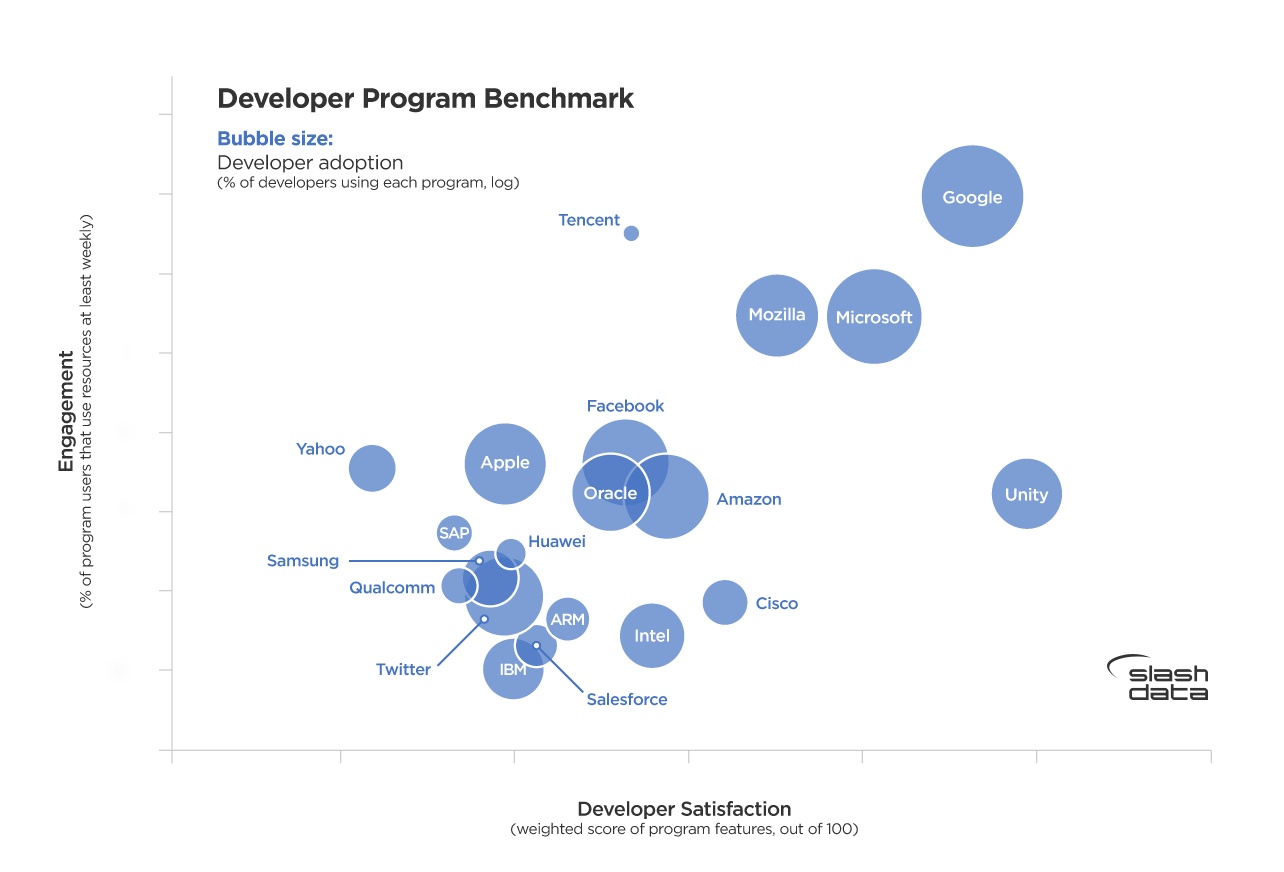 Google, Microsoft, and Mozilla are not only among the largest developer programs; they lead the pack in terms of developer satisfaction and engagement. Other major developer companies like Amazon, Facebook, Oracle, and Apple follow at some distance.

This doesn’t imply, however, that only the companies with the most traction and the biggest budgets can create excellent developer support programs. The living proof of that are Unity and Tencent. As we said, Unity has the highest developer satisfaction of all programs in our list. Tencent, the producer of WeChat who mostly addresses a geographical developer segment in China, has a developer satisfaction on par with Facebook and well beyond Twitter’s, and one of the highest levels of engagement in our survey. Other companies like Intel and Cisco may have moderate overall performances, but lead the way in important attributes such as training, technical support, or access to devices.

The study above shows data from the 12th edition SlashData Developer Economics survey. Over 21,200 respondents were asked which developer programs they used and how satisfied they are with them. These respondents came from 162 countries around the world and span mobile, desktop, IoT, cloud, AR/VR and machine learning developers and data scientists. The results were collected by SlashData over a period of six weeks between November and December 2016.

We‘ve come a long way since VisionMobile was founded in 2005. I founded the company just after I had left Orange (the telco) as a means to build a strategy consultancy for the era of mobile. That was two years before Android and iOS were introduced to the world, and ended up impacting every single industry out there. We, much like the tech industry, have come a long way since then. We ‘ve expanded our research scope from mobile to almost everything touched by software – surveying 40,000 developers annually across mobile, IoT, cloud, desktop, web, games, ML and AR/VR. We pivoted from a strategy consultancy to an analyst firm helping top-100 tech platforms understand developers and measure developer satisfaction with their products. And it’s time to change our name to celebrate that change. But before we get there, some history.

In our first five years we were the mobile strategists, advising mobile software companies on their positioning and strategy. We delivered open source training, measured openness, measured the performance of Symbian vs Android, tracked software players in the 100 Million Club, and mapped the hundreds of players making up the Mobile Industry Atlas.

During our next five years (2010-2014) we were the mobile software analysts. Our team of 10 worked with the top telcos and handset makers to help them navigate the software disruption. We deciphered software business models, analysed the annual Mobile Megatrends, and launched the Developer Economics research series, measuring mobile developer attitudes, monetisation and mapping out enterprise dev tools.

Our third and final phase started in 2015 when we evolved to an analyst firm, launching a set of subscription services. We’ve now found our purpose, earning the trust of Microsoft, Intel, Google, Amazon, Facebook and many more top-100 technology firms, who we help to understand developers and measure developer satisfaction with their products. Our Developer Economics research service now surveys 40,000 developers annually, across mobile, IoT, cloud, desktop, web, games, Machine Learning and AR/VR, from hobbyists to professionals and across 150 countries.

It’s time to change our name to reflect that mission. SlashData (slashdata.co) reflects how deeply we understand developers with data, both of which are at the core of our business. “/” is a common symbol in software development, while “data” captures the DNA of our business, and the core competitive value we deliver to clients.

As SlashData, we have an exciting roadmap ahead of us. Helping the world understand developers, from population sizing, to key developer metrics and where to reach devs; and helping the top-100 tech firms measure developer satisfaction, and competitive developer attitudes. You’ll see us launch a lot of new services and formats. Our second Future Developer Summit is being held on Oct 10 in Palo Alto, and watch this space for our developer satisfaction awards launching very soon!

P.S. Even the re-branding project has been a major learning. We first asked the team to come up with a new name. We flooded a spreadsheet with funny-looking to boring sounding names. But we didn’t feel that, we, the management team had the expertise to ask the right questions – should we keep “Vision”? We imagined puzzled clients hearing a name they haven’t heard before. Should the name be serious or whimsical? Do we need to make the domain name availability a priority or a second thought? So we went to an external agency (who shall remain nameless) crying for help. A month later, we had some more names – but we simply felt they did not express our identity or sector well enough. And just as we were getting to a 404, Christos our designer, suggested /data. It was love at first sight for most of the team. So we went for a bold change – a name that does not carry a legacy to the past, but one that will carry us forward for the next 10 years.