The absolute leader in developer satisfaction is Unity; according to SlashData’s recently released Developer Program Benchmarking report. This proves that not only the companies with the most traction and the biggest budgets can create excellent developer support programs.

Every six months SlashData benchmarks the top developer programs against each other, in the largest study of its kind. Last week we released the Developer Program Benchmarking report where over 21,000 respondents from 150 countries across mobile, desktop, IoT, cloud, web, games, AR/VR and machine learning and data science were asked which development resources they use and how satisfied they are with them. 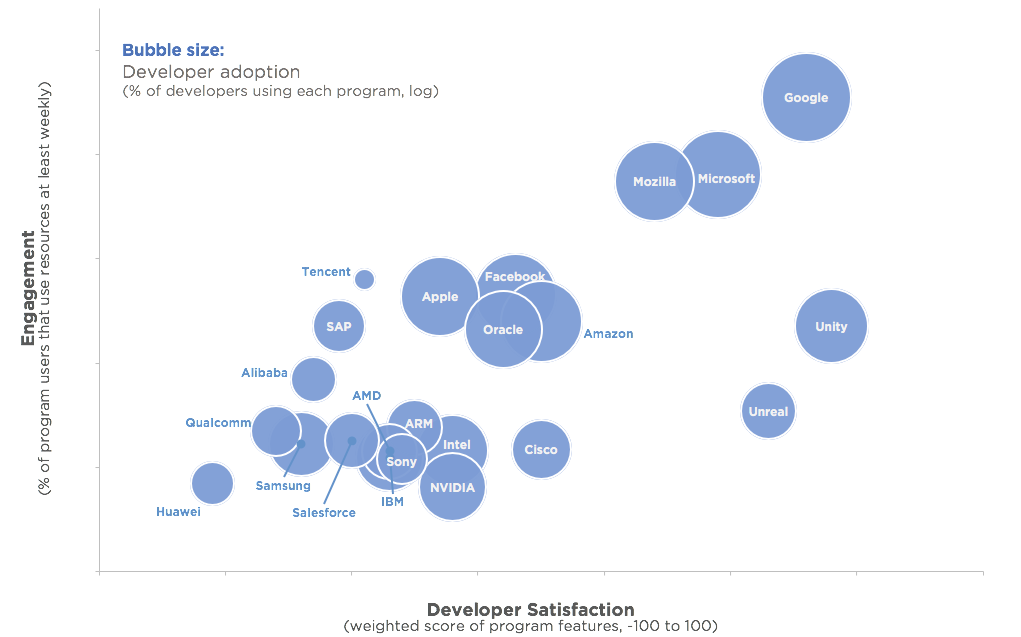 Google, Microsoft, and Mozilla are not only among the largest developer programs; they lead the pack in terms of developer satisfaction and engagement. Other major developer companies like Amazon, Facebook, Oracle, and Apple follow at some distance.

Unity and Unreal, unlike Microsoft, Google, Amazon, and others, cater to the specific niche of game developers. Unity has the highest developer satisfaction of all programs in our list; Unreal is number three in the list. Tencent, the producer of WeChat who mostly addresses a geographical developer segment in China, has a level of engagement that’s on par with giants like Facebook and Amazon (its Western counterparts in some sense), despite being one of the smallest programs in our survey. Other companies like NVIDIA and Cisco may have moderate overall performances, but lead the way in important attributes such as training or access to devices.

To reach these results, first we measure what developers value in resources and activities, in all its diversity across several segments of the developer population. Second, by measuring each program’s impact in terms of adoption, engagement (frequency of use), and developer satisfaction. Third, by highlighting the best practice leaders: those vendors that are doing an excellent job in specific aspects of developer programs, to whom you can look for inspiration and insights on how to improve. There is no single leader across all of the 20 activities we measure – everyone can improve somewhere.

“In this third edition of Developer Program Benchmarking, we matched for the first time how budget allocation in major programs aligns with the expectations of developers. We now have the data to back up our long-time suspicion that events and conferences may not be the best value for money. Also for the first time, we show how expectations are shifting, i.e. which activities are becoming more important to developers over time. We now have a more complete picture of how to get the best return on investment for developer-facing activities.” notes Stijn Schuermans, Senior Business Analyst at SlashData.