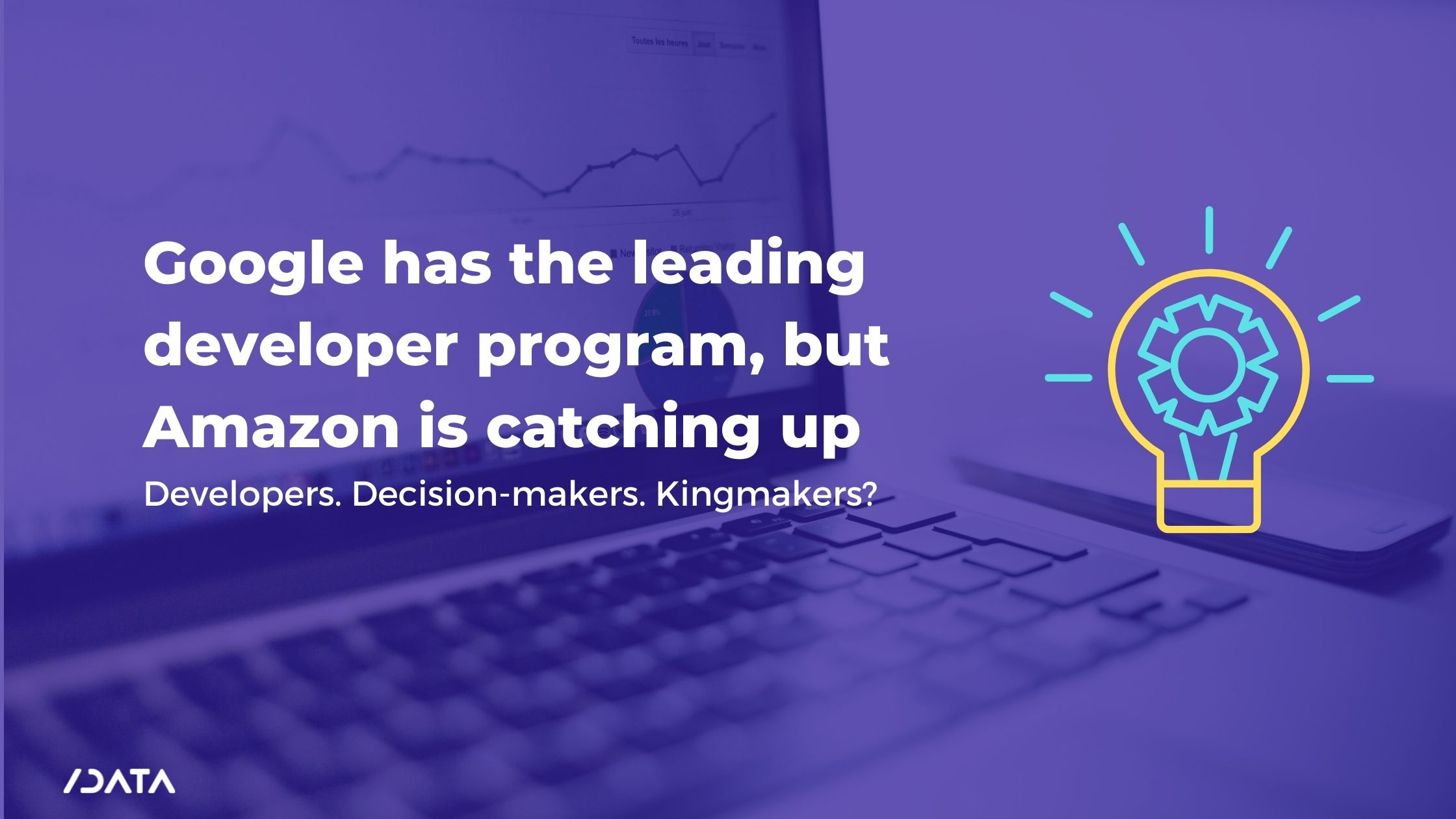 Developers. Decision-makers. Kingmakers?
For several years now, at SlashData we have been helping our clients – some of the biggest names in tech – to understand how their developer programs measure against the competition. Twice a year, we run an extensive and wide-ranging global survey to understand who developers are, what tools and resources they use, and where they are going. Developers share with us their experiences with vendors’ resources – which ones they use, how often they use them, and how happy they are with the experience. We also dig a little deeper into what developers value in vendor support, resources, and communities.

Our research shows that developers are becoming increasingly involved in all stages of the decision-making process. Not only are they writing specifications for vendors and tooling choices, but they are also influencing decision-makers and budget holders. If software is eating the world, then developers are writing the menu.

To attract developers, many tech companies are actively investing in Developer Relations (DevRel) teams and developer marketing activities. They are creating an abundance of resources, training programs, technical support, events, and community activities. It’s not always clear which activities should be priorities and how resources should be allocated to achieve long-term strategic goals. We are here to help.

Our Developer Program Benchmarking research tracks 20+ of the leading developer programs, and captures developer sentiment across more than twenty developer program attributes, ranging from documentation and sample code to mentoring programs and access to experts. In so doing, it helps DevRel and developer marketing practitioners understand how their developer program compares against the rest.

We can see that the Market Leaders; Google, Microsoft, and Amazon highly engage and satisfy developers. Their market share – or adoption rate, shown by the size of the bubble – reinforces their market-leading position. In fact, when we take a longer-term view of this data, it becomes clear that Google and Microsoft have long been the market leaders, staying at or near the top of the table for all three KPIs.

Recently however, Amazon has made considerable progress. In fact, Amazon’s developer program has been growing faster than the global developer population, which is currently 24.3M (you can explore more in our developer population calculator), while Google and Microsoft’s share has dropped slightly. When you take into account the large increase in Amazon’s satisfaction score and their aggressive growth strategy, the top table positions don’t seem so assured.

Our data also uncovers the Satisfying Specialists – these developer programs are often small and focused. Unity, Red Hat and DigitalOcean sit firmly in this space. Developers don’t need to engage frequently with these vendors’ resources, but when they do, they have an excellent experience. For these vendors, low engagement is not a cause for concern, though it does come with its own challenges – when developers have fewer touchpoints there are fewer opportunities to speak to them or to influence their behaviour. For these (and other) vendors with low engagement, messaging becomes vital.

The Under-realised Value segment contains developer programs that, although having high engagement amongst developers, are being held back by their low satisfaction ratings. These programs are often (though not always) small, and the vendors here have a clear imperative to improve their developers’ experience. Thankfully, with developers engaging frequently with the resources there are ample opportunities to effect positive change.

But what, exactly, to change?

This brings us to the true power of our Developer Program Benchmarking research. Not only do we understand how developers engage with vendors’ resources, but we also know which resources are important to developers, and how satisfied they are with the resources that companies provide.

Though developers’ preferences change and evolve, some things stay constant. Of the twenty-plus resources that we ask about, documentation & sample code, tutorials & how-to videos, and development tools, integrations & libraries have consistently been rated as the most important resources that companies should offer. This shows that developers are focused not only on getting things done, using documentation and development tools to speed up the development process, but they also highly value having the opportunity to learn. We can see this repeated further down the list – training courses & hands-on labs provide the learning opportunities, whilst technical support allows them to lean on experts when they need to.

In this way, we can tell which resources developers value, and how their experience matches their expectations. This information, when combined with our wealth of survey data on demographics, firmographics, technology choices, motivations, skills, and much more, becomes incredibly powerful for informing strategic planning. We help some of the leading tech companies in the world to understand precisely which resources need improvement, and which developers will benefit most from such improvements. Have you ever wanted to know how to tailor your tutorials to the right level of complexity? Have you ever tried to decide how to localise your content? What about marketing to enterprise developers, what do they care about?

We also go a level deeper. For many developer programs, we specifically ask developers how they use resources relating to different products or disciplines. For example, we help developer programs to understand whether or not they are vulnerable in the cloud compute market, or what are the specific preferences of developers using IoT resources. Once again, coupled with the rest of our rich and diverse data, this information allows you to create a finely tuned strategy that allocates resources efficiently and effectively.

With developers having such power in the decision-making process, this is a win-win for everyone involved. By understanding what developers value, you can tailor your offering to suit their needs, increasing retention, growing your audience, and ultimately, adding to your bottom line. SlashData are the analysts of the developer nation, and we can help you understand developers.

You can download a preview of the latest Developer Programs Benchmarking here.