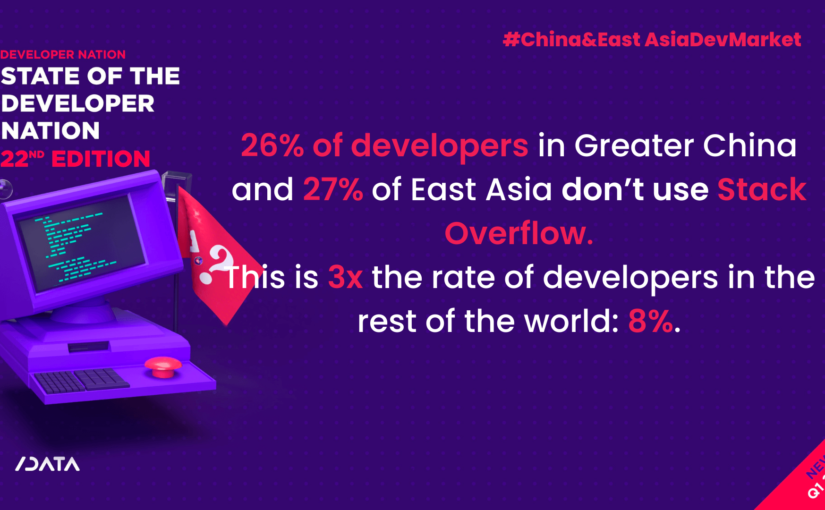 In this article, we share a chapter from the latest State of the Developer Nation report, which anyone can access. We focus our attention on some of the key differences between developers in East Asia, including the Greater China region, and the rest of the world. Understanding these differences provides valuable insights that can help shape the strategy for developer engagement programs.

For this analysis, we split the Greater China area from the rest of East Asia to provide more regional granularity. In terms of relative size, we find that almost a fifth (18%) of the global developer population is located in either the Greater China region (9%) or the rest of East Asia (9%). Breaking down East Asia into countries, we see that more than half of the developers here are spread across two countries: Indonesia (32%) and Japan (21%).

The journey to coding mastery lacks a clearly defined path. Developers typically state they’ve used more than two learning methods on average to learn how to code. In general, the self-taught method is the most popular among developers globally, with more than 60% using this method. However, our data shows that the proportion of self-taught developers fluctuates significantly across regions.

In the Greater China area, the most popular method for developers to learn how to code is via an undergraduate degree in computing, with 50% having used this method. This is significantly higher than developers in other regions (41% – 42%). We generally see a higher concentration of professional developers in Greater China (83%) than we do in the rest of the world (70%). It could be that the job market in Greater China more often requires a degree in computing or engineering, which would also explain why self-teaching is used less often in this region.

Developers in the rest of East Asia, however, tend to follow the learning trends of developers in other regions. Here, we see the self-taught method is the most popular method (61%), followed by an undergraduate degree in software engineering (41%). Analysing the data at a country level, we see developers in Indonesia are more diverse learners. Developers in this country stated that they used three methods on average when learning to code. Indonesian developers are more likely to learn via self-teaching, online courses, and developer boot camps than any other developers in East Asia. This is quite different from their peers in Japan who are the least likely to use online courses and bootcamps to learn how to code. Instead, developers in Japan are most likely to use the self-taught (63%) and on-the-job training (45%) methods when learning to code.

Next, we explore how developers interact with the popular online community, Stack Overflow, to understand their engagement levels with programming support. Stack Overflow has become a standard support community for many developers, with more than eight in ten (85%) of the general developer population reporting they’ve used or visited this popular question and answer site.

When looking closely at the rest of East Asia, we again see that developers in Japan are skewing the perception of this region. Developers in Japan have even less activity on Stack Overflow than developers in the Greater China area. Here, only a little more than a third (36%) stated they use Stack Overflow. Furthermore, only about 5% have an account. Like developers in the Greater China area, Our data does show usage of Stack Overflow increases among Japanese developers who have gained experience in software development, indicating that less experienced developers are using other platforms for support. Like China, Japan has other home-grown options like teratail.com where developers can field programming support from their peers, which may be the place new Japanese programmers visit more often to get answers to their questions.

That’s just one chapter from the State of the Developer Nation report. There are 5 more chapters you can access. Want more? Download the full report!