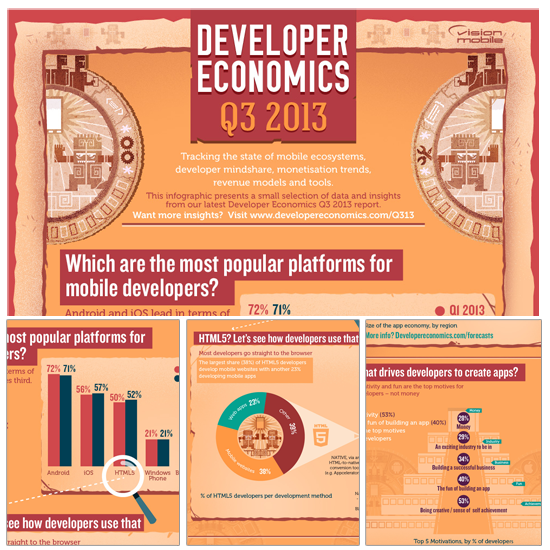 As we’re about to launch the latest Developer Economics survey [UPDATE: we’ve launched the new survey – you can take it here!], we’d like to present you with an infographic with some key stats and figures from the latest, Q3 project, to whet your appetite. This infographic holds just a sample of the dozens of insights from the Developer Economics Q3 2013 report ([vm_form_download link_text=’full report available for free download’ product_id=’4062′]), tracking the state of mobile ecosystems, developer mindshare, monetisation trends, revenue models and developer tools.

Insights from this infographic:
– Android and iOS lead in terms of mindshare, HTML5 comes third: 71% of mobile developers use Android, 57% use iOS, 52% use HTML5
– Most developers go straight to the browser: The largest share (38%) of HTML5 developers develop mobile websites with another 23% developing mobile apps
– There are more iOS developers also using Android than vice-versa: 69% of iOS developers use Android, but just 40% of Android developers use iOS as their second choice, just ahead of HTML5 mobile (29%)
– iOS leads in average monthly revenues – but Android is closing the gap: At $5,200 per developer per month on average, iOS continues to be the most revenue-generating platform for developers, ahead of Android by a margin of 10%
– The global app economy was worth $ 53Bn in 2012, and expected to rise to $ 68Bn in 2013: The mobile segment corresponds to 12.6% of the global developer population. In other words, 1 in 8 software developers is involved in mobile development in 2013
– Creativity (53%) and the fun of building an app (40%) are the top motivators for developers

Can’t wait for more Developer Economics? Our new survey is just around the bend [UPADTE: new survey is live]- stay tuned and take the survey (if you’re a developer), or help spread the word (if you’re not)! For the moment, enjoy this great, new infographic!