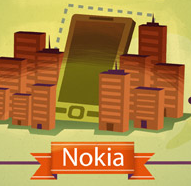 MWC is in full PR mode at the moment.. and the following three announcements from Nokia  show how the game is changing in Finland.

Nokia selects Broadcom as a next generation 3G chipset supplier:

“Today’s announcement with Broadcom is a further example of Nokia’s commitment to our diversified, multi-supplier chipset strategy,” said Kai Oistamo, Executive Vice President, Devices, Nokia. “This agreement, which targets low cost, high volume markets, demonstrates that we view Broadcom as a reliable supplier to bring the benefits of 3G to Nokia customers around the world.”…

Then Nokia’s selection of the ST-Ericsson platform for Symbian/S60 phones:

and finally how Nokia and Qualcomm plan to develop advanced mobile devices:

…Nokia and Qualcomm Incorporated (Nasdaq: QCOM) today announced that the two companies are planning to work together to develop advanced UMTS mobile devices, initially for North America. The companies intend for the devices to be based on S60 software on Symbian OS, the world’s most used software for smartphones, and leverage Qualcomm’s advanced Mobile Station Modem(TM) (MSM(TM)) MSM7xxx-series and MSM8xxx-series chipsets…

What does this all mean?

For years Nokia has been relying on Texas Instruments to produce its custom 2G/2.5G/3G chipsets. Nokia was designing the core chipset and letting Texas Instruments finish the integration and physically produce the chips: Nokia has been mastering the whole hardware IP of its phones, and has not been relying on generic chipsets for the vast majority of its production, with all the margins this implies :-).

Nokia is now feeling the wind of change: from one supplier, the OEM is transitioning to three. Nokia has licensed its 3G hardware IP to ST (and presumably to Broadcom, rumors mentioned Infineon also), and will also use some “generic” chipsets.

Texas Instruments has really missed the ball here, by stopping 3G investment (well they have made some, but failed to deliver), and being mostly ruled by business guys with no technical vision of where the market is going: How can a company with 70% of the billion units chipset market leave the market completely in such a short amount of time? Nokia diversification is part of the equation, for sure.

And Nokia really seems to be shifting their focus: relaxing their efforts on the chipset front, not simply to cut internal costs but to invest, and my guess (as everyone else 🙂 is of course on Ovi, services, etc.

PR after PR, announcements after announcement, product after product, Nokia is showing how serious it is about reinventing itself again. It won’t happen overnight, but it is coming, and it may be a game changer indeed.